Mega Man: Let the Games Begin collects the first four volumes of the Archie Comics periodical Mega Man comics. There are many differences between this series and the manga series also starring the Blue Bomber, but both have their endearing qualities. After months of searching I’ve finally found this trade paperback edition of the series and am going to totally spoil the entire series for you all. But you know what? It’s totally awesome even if you already know what’s going to happen. 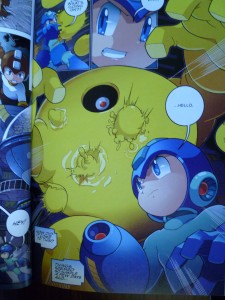 Battling the Yellow Devil in the first few pages

First thing that you’ll notice about this series is the color. Each page, panel, and piece of art is beautifully drawn and displayed in full color. Looking at each panel of the comic is a real treat because everything looks so… Mega Man-y. And this is definitely a good thing. Characters like Rock (Mega Man), Roll, Cut Man, Dr. Wily, Elec Man, and anyone else you can think of from the first game look like they were taken straight from the game.Artist Patrick Spaziante does a phenomenal job recreating the Mega Man universe on paper, and makes this a true must-read for fans of the game sereis.

Dr. Light and Dr. Wily first worked together as partners. Then Wily got all power hungry and messed it all up!

For the most part, Let the Games Begin follows the events that unfold during the first Mega Man game on the NES. Originally, Dr. Light and Dr. Wily worked together to create automatons that would help humans in every day dangerous tasks, like construction work, debris cleanup, and electrical work. Wily felt limited by Light’s tendency to make robots without maximizing their power, and eventually left Dr. Light completely behind. Before long Wily reprograms the six Robot Masters (Cut, Guts, Elec, Ice, Fire, and Bomb) who in turn wreck havoc on the humans. Dr. Light uses his young boy robot Rock as a bastion of hope for the people to reconsider robots and creates Mega Man to thwart Wily’s intentions. Needless to say (since there are mountains of more games starring Mega Man), the Blue Bomber eventually wins and imprisons Wily for his dastardly deeds.

There are many nods to the game series, including this homage to the Robot Master level select screen

The only thing I’m not entirely on board with is the writing. I don’t really know what I was asking for, considering this comic is based off a video game that has as much story content as a Twilight novel, but there isn’t anything compelling in the narrative. Mega Man goes about destroying each Robot Master as you’d expect but he also deals with moral issues and his own inner power struggle.I’m not knocking Ian Flynn (the writer) but I’m saying it isn’t a good story. Just give me Wily running rampant, Mega Man kicking ass, and awesome action scenes! Is that too much to ask?

This series is distinctly different from the Japanese manga series. The art style in Let the Games Begin is spot-on when compared to the source material, while the manga feels a bit more… Japanese in terms of style. Both series’ have great art, don’t get me wrong. The color in this one does wonders for it however, and in many ways eclipses it’s Japanese counterpart. I do have to give a bit more praise in writing to Gigamix because it’s more unique a story while this comic is loosely based off events in the first game alone.

Cut Man enjoys his puns, for better or for worse 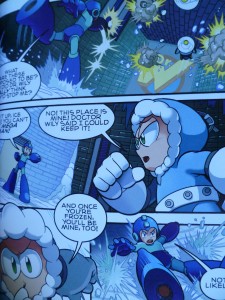 Ice Man gets dealt with fairly quickly, but he's still one of my favorites

Mega Man: Let the Games Begin is required reading for Mega Man fans. I absolutely ate it up while reading it. What really appealed to me was the art style and seeing my favorite characters and villains spring to life on each page. If you’ve played most of the Mega Man games then you’ll catch a lot of inside jokes and references to past games. Overall I would recommend this one easily to fans of the video games (the classic video games) as well as video game comic enthusiasts. Other graphic novel connoisseurs may not see what the big deal is with this one.

One cool addition to this package is the extra content found in the last few pages. These funny “Short Circuits” comics usually deal with one or two hilarious inside-jokes for the series. Here they all are for you to enjoy 🙂 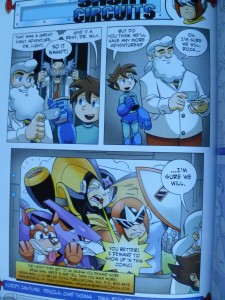 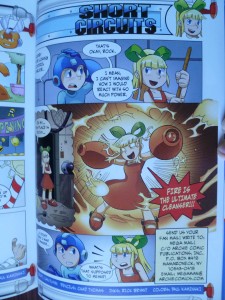 And there you have it, Mega Man: Let the Games Begin. I hope that you decide to pick up a copy of the graphic novel if you’re a Mega Man fan like myself. I’ve actually already finished the second collection of comics as well and will be posting about them here shortly. I’ll end with this: The Mega Man comics are fun, entertaining pieces of Mega Man media and I can’t wait for the rest!