Every year brings new innovations to the medium, new games to get us excited, sad, frightened, or happy, and new games to look forward to. 2013 will possibly see the release, or at the very least see the announcement, of brand new consoles from Sony and Microsoft. That means 2013 could be the last year in the current generation of games. With the burden of an entire generation on it’s shoulders, as well as next generation systems already released by Nintendo, 2013 could be one of the better years in gaming. While there will be dozens of games adored and loved by gamers this year, here are 10 titles that I’m particularly excited to see and play. Each of these games range in target audience, platform, genre, and concept, but all of them are shaping up to be future best sellers, award winners, and possible candidates for truly memorable and classic video games. END_OF_DOCUMENT_TOKEN_TO_BE_REPLACED

After hours of editing and updates, the DS section of Slick Anthology is now complete!

Slick Anthology is best described as my video game collection in blog form. I’ve undertaken then near-insurmountable task of cataloging all of my games into one location. While it’ll take a hell of a long time to get the Anthology where I want it to be (ie: complete) it’s nice knowing that two sections are complete (DS and 3DS).

I encourage you to head over there and browse around. I’ve written a bit about each title as well so you can learn a little if you didn’t already know about the game, as well as linked to any relevant articles I’ve written about each game. As always, more games to come!

Posted by jsicktheslick on 01/30/2013 in Collecting, Randomness

As one company falls, another announces a handful of new games that have me excited.

This week saw the official end of THQ, as the publisher sold off its assets to those willing to buy and has ceased to be. While at the same time, Nintendo unveiled a ton of new games for their consoles, including new Zeldas, Marios, and more. END_OF_DOCUMENT_TOKEN_TO_BE_REPLACED

With most of its IPs sold, its development houses auctioned off, and the company in the aftermath of bankruptcy, THQ is gone. While companies shutting their doors is always a somber moment, we as gamers can hold out hope that the developers formerly of THQ will find work and continue making great, quality video games for us to enjoy for many more generations. Most all the talk in the game news media this week has centered around THQ, which got me thinking about the company and its games. For a company that has gone away, they sure had a hell of a lot of great and memorable games! END_OF_DOCUMENT_TOKEN_TO_BE_REPLACED

Episode 7 of the Recurring Bosscast is now live!

This time we talk all things game related at CES, as well as our outlook on 2013. Mainly what new systems will be released.

There’s also discussion on a few games, including Unchained Blades on my end, as well as Jett finishing up XCOM: Enemy Unknown, and Mat playing through Super Brothers.

END_OF_DOCUMENT_TOKEN_TO_BE_REPLACED

Posted by jsicktheslick on 01/23/2013 in Recurring Bosscast

The first proper Sunday Roundup of the year. That feels good to say.

What’s also good is being able to explore new cities and raid the local game shops for whatever hasn’t been cleared out already. In this case that means two shops with a huge backlog of games (some good, many more not so good) I added to my collection. I’m still working on completing that Dreamcast collection, so that’s making up a hefty portion of this weeks haul. Other than Sega’s finest, I’ve got a handful of haggled-for PS1 titles.

Also of note, I returned to the same Goodwill store I went to around this time last year where I procured two still-in-box NES games. This time around, there were complete Japanese PSP games. Excellent find as well. END_OF_DOCUMENT_TOKEN_TO_BE_REPLACED

Posted by jsicktheslick on 01/20/2013 in Collecting, Dreamcast, Playstation 1, PSP

Two pieces of news this week could mean two very different things. Nintendo consolidating its handheld and console divisions could mean struggles at the company, but it could also (and more likely) mean the game company is looking to become more competitve in the growing market. And then there’s Sony’s selling of it’s US headquarters. This could mean seriously bad things for the Japanese giant, but it is likely just a move to ease the financial loses and move forward as a company.

Slick Anthology Is Live (But Still A Work In Progress)

I had a lot of ambition when I first started this blog back in 2011, but I couldn’t quite fit everything I wanted to do in just this one blog. So instead of having this blog be all over the place and not focused on game reviews, articles, news, and videos, I decided to make a new, separate blog that would focus entirely on my game collection.

Slick Anthology is a blog that collects each game in my own personal video game catalog. Serving as both an online log for myself and a place where gamers can go to learn a little bit about the games and discover a game or two they may not have known about, Slick Anthology is shaping up to be exactly what I wanted it to be. Every game will have it’s own dedicated page, as well as links to purchase the game yourself, read my reviews and comments about the game, and even link to any relevant videos or articles I’ve written concerning each title. 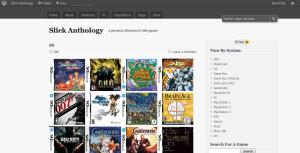 As I said before, it’s still a work in progress, but I’m happy to unveil it to you all now. Head on over to Slick Anthology and follow the blog if you’d like to see my collection grow and want to know every game I have.

Thanks, and I hope you enjoy the new blog!

Don’t you just hate it when you get into a fight with a goddess and she turns your once supreme dragon body into that of a whiny, pathetic human? As ridiculous as it may sound, that’s just what happens in Unchained Blades, a new dungeon crawler for the Nintendo 3DS available exclusively through the online eShop. Intense grinding, a focus on character development, and a dull story keep Unchained Blades from being anything other than mediocre and a game that will only resonate with a precise crowd.

END_OF_DOCUMENT_TOKEN_TO_BE_REPLACED

It was a good week for gamers indeed.