The Recurring Bosscast: 028: Celebrating One Year of Bosscasting

Episode 28 marks the one year anniversary of the Bosscast being on Splitkick. Huzzah!!

Besides recollecting a bit on the year behind us, Jett, Mat, and I give the good ol’ Xbox 360 a final farewell as we officially enter into the eighth generation of video game consoles. What were our favorite games, least favorite games, best features of the console, and even the games that might become collectible in the future (!), all that a more in this episode of the Recurring Bosscast.

Click the link below and enjoy!
The Recurring Bosscast Episode 028: Celebrating One Year of Bosscasting

Posted by jsicktheslick on 10/29/2013 in Recurring Bosscast

With literally thousands of video games out there begging for your time and money, it can be more than daunting finding a starting point for a growing collection. Worse yet (or better depending on how you look at it), more and more games are being released each and every week! So where to begin? In part one of a special Game Hunter’s Journal series, we’ll discuss the best practices for collecting current generation video games, where to buy new games, how to save money, and what to look for when seeking future classics and rare titles. END_OF_DOCUMENT_TOKEN_TO_BE_REPLACED

By now you know what you’re getting with each new Pokemon game: more adorable creatures to catch, train, and battle, new regions to explore, and a lighthearted story that  ties everything together. For more than fifteen years Nintendo has been releasing games that follow this very formula time and time again, and each new version sells millions. In no way a departure from the series form, Pokemon X and Y take small steps towards making an already great franchise even better. END_OF_DOCUMENT_TOKEN_TO_BE_REPLACED

Man, these GameStop deals really need to stop. I’ve been dropping $30-$40 a week on these Buy 2 Get 1 Free, 3 for $15, and 2 for $10 sales. Granted, they’re all really good deals in my opinion, and I’ve been able to track down some games I’ve been searching awhile for, but still! Maybe what I really need is just another store to have a sale so I can ransack their racks and let the half dozen GameStop’s around me replenish. Whatever the future may hold, here are this week’s games. Quite an assortment, too!

END_OF_DOCUMENT_TOKEN_TO_BE_REPLACED

After another small hiatus the Game Hunter is back with a brand-spanking new episode!

This time around we discuss the differences between rare, expensive, and just hard to find games. What’s the difference between them all, what does that mean to you as a collector, and what should you keep an eye on when looking at online auctions? All those questions (and more!) are answered in the video below!

If you like the Game Hunter series and want to see more, let me know and I’ll be happy to cover a topic you have in mind! Also, if you’re really cool, subscribe to my YouTube channel and get all my videos lightning fast!

Some RPGs are about telling a story.

Some are about finding the best loot.

Some are just about surviving, plain and simple.

And then there are RPGs like Etrian Odyssey Untold: The Millennium Girl that has the whole package: it constantly pits you against fearsome foes, always tempts you with a shiny new piece of equipment, and has an interesting story to boot. Etrian Odyssey Untold acts as both a remake and reimagining of the original DS game, and incorporates aspects from the recent Etrian Odyssey IV: Legends of the Titan to create a game that is arguably the best in the series and one of the finest in the entire dungeon crawler genre. END_OF_DOCUMENT_TOKEN_TO_BE_REPLACED

After sitting out for an episode I’m back on the Bosscast with Mat and Jett!

With all the talks focusing the past few weeks on Grand Theft Auto V, I’ve been feeling a bit left out of the gaming loop in terms of what’s new. But all that is going to change with the release of Pokemon X and Y. In this newest episode of the Recurring Bosscast I lead a discussion on all things Pokemon! Unfortunately Mat and Jett don’t share my enthusiasm for the series… nonetheless, Pikachu and crew are back! 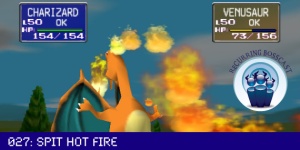 Click the link below and enjoy!
The Recurring Bosscast Episode 027: Spit Hot Fire

Posted by jsicktheslick on 10/15/2013 in Recurring Bosscast

A scheduling conflict prevented me last week from posting my new games added to my collection. This week however I had no excuse to miss the weekly reporting so I present to you essentially two weeks of games thrown into one! And, for a little extra kick, there’s even a single game I received three weeks prior that I’m writing about just for good measure. Huzzah!

END_OF_DOCUMENT_TOKEN_TO_BE_REPLACED

I can’t tell you how many times I played Harvest Moon and thought to myself, “Man, growing crops, starting a family, and helping out around town is great, but what this game’s really missing is monsters, dungeons, and battle axes.” Thankfully for all of you who share my concern a brand new Rune Factory game is here and it delivers on all your turnip-growing, monster-slaying desires.

END_OF_DOCUMENT_TOKEN_TO_BE_REPLACED

The lure to the Scribblenauts franchise has remained the same game in and game out: use your imagination to create any object you can think of and have it appear in the game world. It is the heart of the series and where the different iterations of Scribblenauts shine; I was always impressed that I could actually create just about everything I had in mind. That said, while each new Scribblenauts game offered more creation opportunities and surprises, the same problems tended to show up again and again. Though they tried, not even the entire DC Universe can save Maxwell from another run of the mill adventure.
END_OF_DOCUMENT_TOKEN_TO_BE_REPLACED
Leave a comment