Nintendo’s flagship franchises each excel at doing one thing particularly well: Mario is an approachable platformer for all ages; Zelda fulfills the epic fantasy needs we all crave, Metroid is our exploration and shooting fix, and so on. With the release of Donkey Kong Country: Tropical Freeze on Wii U, the follow-up to the Wii’s Donkey Kong Country Returns, Retro Studios’ reimagining of the DK crew corners Nintendo’s need for a precision platformer. No more DK Raps, no more King K. Rool–just gorgeous backdrops, satisfying gameplay, and pitfall after frustrating pitfall.

Check out my first full Wii U review on Machinima’s Inside Gaming Daily blog!

Man, it has been awhile since I had a true Sunday Roundup to talk about! Just one game is fine and all, but let’s face it: Just one game isn’t going to cut it for expanding upon one’s collection now is it? Speaking of collections, this week is comprised mostly of Dreamcast games, a system I am always on the lookout for but never seem to come across. So here’s to you Space Cat, and to more fruitful visits!

END_OF_DOCUMENT_TOKEN_TO_BE_REPLACED

Posted by jsicktheslick on 02/23/2014 in Collecting, Dreamcast, GameCube

We’ve all been there: perusing the goods on sites like eBay or maybe even Craigslist and coming across someone selling a collection of games for a decent price. Sure, you probably don’t want all of the games there, but some of them are just too good to pass up! So what should you do? As a collector, video game lots can be a huge win or a very risky and sometimes poor jump to take. Here are some tips to keep in mind when thinking of purchasing video game lots. END_OF_DOCUMENT_TOKEN_TO_BE_REPLACED

By now you all probably know that Square Enix’s new RPG Bravely Default has captivated me unlike any game has as of late. You also might know that there are quite a few “Tips for Playing Bravely Default” articles out there. I mean like… a lot. A lot a lot. Something I’ve noticed though about these helpful articles is that, well, not all of them are all that helpful. I mean sure, most of them are great for beginning players. But I’m not a beginning player anymore. I’m needing help in other areas. That is where most of these “Tip” articles fall out of relevance.

For those of you that already have a grasp on the Job system, those players out there that have maxed out the shops in Norende, the gamers who have already awakened the four crystals, I have a few actual end-game (or near end-game, for that matter) tips and advice that you probably didn’t know you wanted/needed. END_OF_DOCUMENT_TOKEN_TO_BE_REPLACED

The Recurring Bosscast: 036: Pour One Out For Flappy Bird

Mat’s MIA this week, but not for the murderous reasons behind Jett’s disappearance last week (he’s just sick), so it’s just Jett and Jason this week.

Besides almost diverging into another movie review show, Jett and I discuss the phenomenon that is/was Flappy Bird. Having not played the game until very recently however, I can see why people have been addicted to it.

We also speak our minds about Nintendo, following their most recent Nintendo Direct, and discuss how we might go about fixing the Big N’s woes. 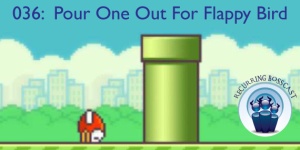 Click the link below and enjoy!
The Recurring Bosscast Episode 036: Pour One Out for Flabby Bird

Posted by jsicktheslick on 02/18/2014 in iOS, Recurring Bosscast

You can’t be as venerable as the Final Fantasy series without spawning a few spinoffs. Usually the spinoff is a chance to use some of the same mechanics as the core series but make something drastically different: perhaps a totally different battle system, completely different approach to story, and sometimes just a celebration of the many years of success the source series has entertained. Regardless of the influence, there have been dozens of spinoffs and pseudo-sequels for Final Fantasy games, and none more awesome than the ten below.

END_OF_DOCUMENT_TOKEN_TO_BE_REPLACED

Posted by jsicktheslick on 02/09/2014 in Collecting, Nintendo DS