You Might as Well Buy the Photos With Mario Cards

If you frequent Target stores, specifically the electronics section of Target stores, you may have come across one of these special pre-paid Nintendo Points cards.

They’re $10 Nintendo eShop cards that also come with a small bonus: an AR card that can be used with the Photos With Mario app.

Why they are exclusive to Target I do not know (even though I work at Target!), but if you have a Nintendo 3DS (or even a Wii U, because they work for the Wii U eShop as well) you should consider going there and picking up all three. Each card comes with a special AR card that can be used to take some augmented reality photos with Mario, Peach, or a Goomba.

The card itself is tucked inside the packaging pictured above, and simply needs to be removed from the perforated edge to use. They look like this: 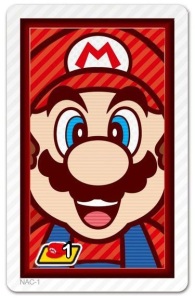 If you remember the AR cards that came with the 3DS system, these work in the exact same way. Just boot up the Photos With Mario app (which is a free download from the eShop) and place the cards on a flat surface and watch the characters come alive! 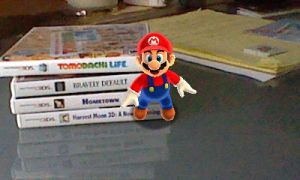 Each character has a couple different poses they do, as well as a few sayings and sound effects to boot. A neat feature allows you to “Pick Up” the character and move them to any where else you’d like, regardless of the location of the original AR card. This means you can get Mario on screen with the AR card, and then move him where ever you’d like around your house, office, place of business, etc.

More interestingly, the cards interact with one another. For instance, the Goomba will start to attack Mario, but our plumber makes quick work of his old foe: 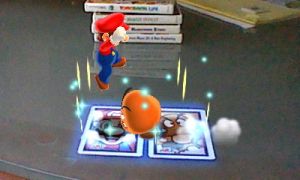 Likewise, Peach and Mario have interactions as well:

Sadly, Peach and Goomba aren’t all that interesting to ogle over: 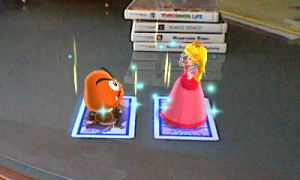 All three can be used as well: 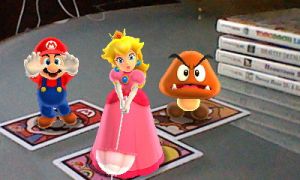 Toad! Haha, I was really surprised when I saw the Green Pipe, but actually had a smile on my face when I heard Toad’s “Iconic” scream/gargle as he came out of the pipe.

When it comes down to it, there’s really no lasting value with Photos With Mario, and will only appeal in any sort of greatness to photo nuts and Nintendo fanatics.

The entire review for Photos With Mario and the $10 pre-paid cards can pretty much be summed up as follows: WHY NOT?

The $10 cards don’t cost any extra, and you get bonus stuff anyway. Sure, it’s not the greatest bonus gift, but it’s something! I’m sure some will come up with neat scenes to put these characters in, but most of us will just enjoy the app once, and then take the $10-$30 investment and hop on the eShop.

Assuming these sell well (which they should, because again, why not?), we can probably expect more AR cards with pre-paid cards in the future. In Japan, there are also three other Photos With Mario AR cards: Luigi, Koopa, and Bowser! 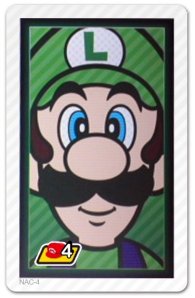 These cards (even these pictures above) actually work already with the App! I had Bowser and Koopa on my screen, but I couldn’t get a good angle with my computer screen to take any quality photos. I hear you can just print them out and use them, but where’s the fun in that?! It’s also interesting to note that Nintendo released a similar AR card promo with Animal Crossing AR cards, but as of now there is no plans to release those in North America, but here’s hoping!

So there you have it. The Photos With Mario app isn’t anything too special, but it is something free that you can enjoy for a short time. There’s really no reason to not pick these cards up, especially if you’re going to be buying from the eShop any time in the near future. Free games with money that you were going to use to buy games anyway. You can’t go wrong with that!