Werewolves, vampires, mummies, skeletons, and all things that go bump in the night start to jump in the night in Gabrielle’s Ghostly Groove 3D on the Nintendo 3DS. When you get the hiccups and suddenly turn into a ghost (I know, bad luck, right?), the only way to get back your corporeal form and rejoin your grieving mother is to dance and rock out with all variety of Halloween cliches. While the concept is fine and the art style is eye catching, the brevity, repetitiveness, and overly simplistic gameplay keep Gabrielle from being anything memorable.

Gabrielle’s Ghostly Groove 3D follows a very simple formula: you start a stage, get a bit of semi-interesting background story, and then play a “dance” minigame for 30-60 seconds. After each stage you’ll receive a score based on your performance, as well as some cash to buy extra outfits. That’s… it… There really isn’t much more to the overall game besides replaying each of the game’s 25’ish stages on two higher difficulty settings to unlock more outfits. The entire experience can be completed 100% in less than 6 hours, so if you’re looking for a deep game you will have to look elsewhere.

When performing each song, which is referred to in-game as the “ghostly groove”, a series of notes/icons will appear on the top screen and you have to tap or slide accordingly on the bottom screen. It is hardly dancing, but then again we’re playing on a portable game system so that shouldn’t have even been a thought to begin with. The songs are the crux of the entire experience, and thankfully the songs are fun… for the most part. On the normal difficulty the songs are just too easy and boring to hold your attention. If you stick through it and play the entire game on normal and hard difficulty, you’ll be able to play on the reasonably enjoyable “impossible” difficulty. It’s better, but not enough to save the entire game from being way too easy.

It was the visual style that initially impressed me before playing Gabrielle’s Ghostly Groove 3D and it delivers well enough in the game itself. There are only around 10 actual characters and character models used throughout the game, along with an equal amount of locations to dance. Diversity isn’t huge in the game, but what is there is endearing and fun. The gothic-anime style fits the theme of the game well, too. But just like the gameplay it feels too short to be considered worthwhile: More characters, hell, even more outfits for characters other than Gabrielle would have made it better. Anything than using and reusing the same characters, dancers, and dance moves time and time again.

For a game about dancing and music, Gabrielle’s Ghostly Groove 3D doesn’t have too many memorable songs or dances. Occasionally one of the tunes will sounds familiar, but the same can’t be said for any of the on-screen dances. Gabrielle and her companions just sort of sway back and forth, and sometimes spin or jump, not even with the beat most of the time, which they constitute as “dancing”. The plot of the game has you collecting screams from unsuspecting humans (much like the plot to Monsters, Inc.) by dancing in front of them, so I like to think the screams you’re collecting are actually from the humans being so appalled by the dancing that they just freak out and run away. It kind of makes the game better, but in a really sad, depressing sort of way.

As an early 3DS title that was essentially a remake of an even earlier WiiWare title, Gabrielle’s Ghostly Groove 3D isn’t all that great in any respect. But it isn’t all that bad either. I had my hopes high for the game, but a handful of completely missed opportunities hold the game back from being anything more than a weekend playthrough for only the dedicated. There are other, much better music games on the system that do essentially the same thing in terms of gameplay, but do it so much better. 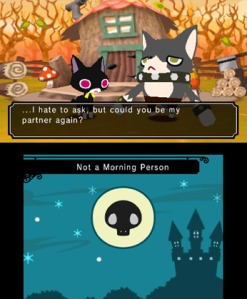 Overall I was disappointed with Gabrielle’s Ghostly Groove 3D. Despite being an early 3DS game, I still hoped it featured some cool songs or interesting gameplay. The only aspect it kind of delivered on was the visuals, which were cute and cuddly but not enough to save the whole game. If you’re a music game fan you might want to check it out to see how to not make a rhythm game, and everyone else can simply steer clear.