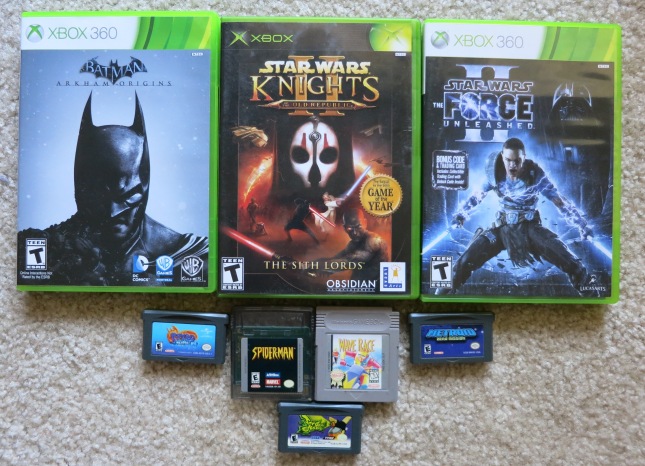 Admittedly, I don’t get around to all that many garage sales. I really enjoy going out and trying to find treasures in some other person’s trash, but getting time off from work and actually having the day set aside to do so is harder than it sounds. But last week the deal-finding stars aligned, and Laura and I were able to hit up a few garage sales! We were in search of a new-old computer desk (which we did end up finding, although via Craigslist), but that didn’t mean I wasn’t keeping an eye out for games. Though nothing too crazy on this find, it only solidified in my mind that garage sales are a legitimate means to pick up a ton of games on the cheap!

As luck would have it, the first place we stopped at looking for a desk didn’t have what we needed for our tiny apartment, but right down the street was another garage sale that certainly had something of interest for me.

Sitting on the table right in front of a rather happy man sitting in a chair were two Game Boy games and three Game Boy Advance games: Wave Race for the original Game Boy, Spider-Man for the Game Boy Color, and Jet Grind Radio, Spyro: Season of Ice, and Metroid: Zero Mission for the Game Boy Advance! All of them were loose, of course, and I was actually very happy to pick up just Wave Race, as it was a game I was wanting for some time (completes the series!). I asked the gentleman sitting down how much for the Game Boy games, and he told me, “You can take them all for one dollar.” Well hot damn, you’ve got yourself a deal, stranger!

Doing what I like to do when I get new games, I decided to look them up on eBay to see if they were actually worthwhile. In this scenario it isn’t going to get much cheaper for these games than literally 20 cents each, so anywhere else will be more expensive, but in a few cases these were absolute steals! Wave Race, Spider-Man, and Spyro: Season of Ice all sold regularly online in the past few weeks for around $5 loose. Jet Grind Radio averaged around $15-$20. The big winner was Metroid: Zero Mission: that bad boy averaged $25-$30 per loose copy! Sweetness! I tried all the games too, and they work smoothly!

While perusing other garage sales, still in search of that computer desk, Laura and I happened upon a small street with just one sale. The couple running the garage sale had recently moved to the area, and were also new parents judging by the age of their toddler making a fuss. On their shelf of goods for sale Laura found a really nice pair of drapes from IKEA for just $5, but I found a stack of old Xbox games! Underneath the multiple stacks were stickers with prices, which I assumed applied to each stack of games. I picked up just one Xbox game: Star Wars: Knights of the Old Republic II: The Sith Lords for just one dollar. Again, a quick look online found the game for significantly more, but I’m not going to be selling it, as KotoR is one of the only series’ I found worthwhile on the original Xbox.

Next to the stack of original Xbox games this guy was selling PS3 and Xbox 360 games for $4 a pop. I had all the PS3 games (he only had like, four of them), but I didn’t have all the Xbox 360 ones, and I legitimately wanted a couple of them. I picked up Star Wars: The Force Unleashed II for just $4, and when I picked up a copy of the relatively recently released Batman: Arkham Origins I noticed it had a $10 sticker on it. Assuming he wanted more money for it because it was newer, I was hesitant about buying it. Instead I asked the person selling them if the games were all priced like the stickers underneath said, as this game had a different sticker on it. I don’t know if it was out of the kindness of this other stranger’s heart, or if he made a mistake, but when I said that to him he told me I could get that game for just $4 as well! Needless to say, I bought it right away.

Though we frequented many other garage sales, some of which had some video games, those are the only ones I bought. I was really excited when this one guy with a funny accent had a whole bunch of GameCube, Wii, and PS2 games, but the jerk-face was selling them for like, full retail price! Granted, they weren’t outrageous ($19 for Soul Calibur II sealed on the GameCube, or the original Pikmin for $40), but I was hoping he didn’t know what he had, or at least was trying to sell them at a “please just get these out of my house” rate like that first guy I bought form.

Either way, this trip really made me want to go to more garage sales! For a collector it’s not the best option, because you’re probably never going to find a complete, rare, or hard to find game at a sale like this, but there’s always a chance! I’ll take that gamble more often if it means I can get a great find for a few bucks. Perhaps this will be a new way for me to sweep up loads of incomplete/loose games on the cheap! And who knows, maybe one day I’ll find that garage sale holy grail and come back home with a pristine copy of Lunar: Silver Star Story Complete for the PS1! Hell, I’ll settle on something like that any day!