You take some risk when playing games from nearly a decade ago. In that span of time many developers and game designers have time to hone their craft and really get a grip on what a system or console can do. The Nintendo DS is a perfect example of this, because not only was it a more powerful version of Nintendo’s handheld line, it also introduced a second touch screen to play around with. Early games on the DS used that second screen as an inventory management screen, a place to show the map, or a different way to control the game. Perhaps we’re all spoiled now in 2015 after 10 years of successful games on the system, because going back to Tao’s Adventure on the DS just reminds me how far we’ve come.

The core gameplay of Tao’s Adventure is built upon a solid foundation. There are monsters that need killing, and naturally the only one capable of doing so is a young boy who literally just learned how to cast spells hours before his entire island was turned to stone. Each battle takes place in real time, with movement and attacks functioning similar to current games like Etrain Mystery Dungeon. As you defeat monsters and go deeper into the labyrinth you’ll level up, learn more spells, get better equipment, and even discover some monster eggs which can be hatched to grant you monsters to aid you in battle! All and all it’s pretty standard affair as far as RPGs go, and that certainly isn’t a bad thing.

Unfortunately, it’s the execution that ruins the experience. 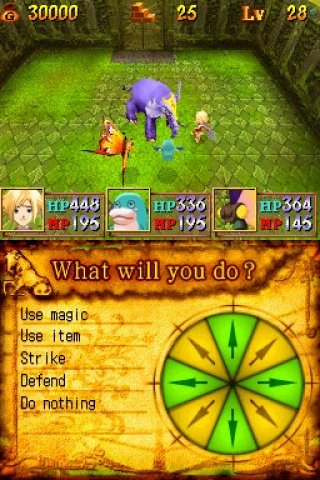 You’re required to use the touch screen to access your inventory, cast spells, and input commands to attack your enemy. This wouldn’t be a bad thing if it wasn’t so damn slow! Tapping your inventory brings up your menu in a couple seconds, leaving you to just wait there while it slowly comes into focus. The same goes for magical attacks. Casing a spells requires you to tap “Use Magic”, draw out the rune/shape of the spell in order to cast it (something Konami pulled from their past DS game Castlevania: Dawn of Sorrow), wait for the screen to shift from an isometric view to a top-down view, select in a grid the target for your spell, then wait for the spell effect to play on screen, then see the result of your spell. Oh, and that’s all assuming you are already using a rod/wand, which are required to cast spells, but lack any physical damage to make pounding enemies efficient, meaning you’ll just waste your MP by casting spells that do little damage. Thankfully you don’t have to use spells all too much, but a bit more speed here would have been nice.

Or, you know, the option to use any of the 6 buttons which aren’t even used in the game! All the face buttons and the shoulder buttons go unassigned (With the exception being the A button which can be used to clear text marginally faster). Why do I have to go to a person and face them directly then tap on talk (or sometime’s “Search” for some reason?) just to interact with them? Why can’t I just press A like a normal game? I’ll give Tao’s Adventure and Konami a break here though, since they were likely using the stylus controls because it was new and novel at the time. Still though, look at where we are now with our DS games: there’s nary a game these days which require you to use the touch screen that don’t also have standard control options available.

Sadly, this issue is compounded upon when outside of the dungeon and in the shops. If you want to sell things, you have to go to the specific vendor. I understand that: an accessory shop doesn’t want to buy my weapons because, well, they’re not a weapon shop. But why is it when I go to any shop to sell something I can’t navigate with the D-Pad and have to use the stylus? And why do I have to go back to the selling menu each time I want to sell something? Why isn’t there a way for me to move around the items in my inventory to make them easier to see and sell? And why can’t I just pick up gold pieces to add to my wallet instead of only picking up gold and silver nuggets whose only purpose are to be sold to give me money? It just doesn’t make sense to me. It’s like the game is meant to make you use the DS’ touch screen, but doesn’t quite know how to do it yet.

In all fairness I’m giving Tao’s Adventure a hard time. It’s actually an okay game. It’s just bogged down by poor design choices. But I have to ask myself if they were poor design choices back in 2006 when the game was made. There wasn’t anything else to base the gameplay on at the time. Now we have dozens of excellent RPGs that do what Tao wanted to do only better. I can see what the designers were trying to do here with the controls and how it all played out on screen, but it just wasn’t necessary to do it that way. I feel constricted.

It makes me appreciate where we are with our handheld games today. It took some brave developers to try something new back in 2006 with new hardware in order to eventually get it right. In that sense, Tao’s Adventure is kind of a genius game: it paved the way for the future Fire Emblems and Final Fantasy Tactics’ on the system. Drawing on the screen to cast spells is pretty cool (so long as it recognizes my horrible drawing skill). Tao’s Adventure is in no way a classic or hidden gem or anything like that, but I have to appreciate what it was and what it tried to do. There are dozens or more better games out there. But this little title tried hard, and that’s a lot more than I can say about plenty of games released today.

← Sunday Roundup: 10/11/15
Skylanders Trap Team is the Best Way to Play with Toys in Video Games →