It has been a busy couple of weeks! The end of May I went back home to watch my brother get married! It was amazing, of course, and it was the first time I was back home in Indiana in almost two years! The weekend immediately after was Fanime, an anime convention here in California that we’ve gone to for the past few years. We dressed up, we bought stuff, and we had a good time. Following that we had a friend move in with us until he can find a place of his own, and now Laura’s sister is back home for a couple weeks before her job starts! Phew! Thankfully though, a visit home means a ton of new video games I can’t get here in California! Let’s break it down! END_OF_DOCUMENT_TOKEN_TO_BE_REPLACED

A visit to Los Angeles for family and friends is great, and being able to hit up a couple used game shops along the way is even better! I haven’t been to LA in six years, so it was nice to get back there and see that some places were still the same, but others were totally revamped! Par for the course for a major city I suppose. Anyway, after a visit to a shop that wasn’t all too thrilling, my brother and I hit up a place that was literally, and I mean this in ever sense of the phrase, packed floor to ceiling with games from every console. It was a little piece of heaven that I can’t seem to find in my neck of the woods. Anyway, let’s get to it! END_OF_DOCUMENT_TOKEN_TO_BE_REPLACED

Way back in 2013 when I was just visiting California I decided to check out one of the local used game stores. While I found some games there and the owner had an impressive selection, I never decided to go back there once I moved here because of the prices. They weren’t terrible, they were just fair. And while fair is fine, I’m not usually looking for fair (I’m looking for great!). This week I decided to check out Game World once again, hoping maybe some things had changed. Well, the place was just as cramped and overflowing as before, and the prices were just the same. Regardless, maybe I’ll have to check out the place more simply because it’s really the only place to get PS2 and earlier era games! Let’s take a look at this week’s haul.

END_OF_DOCUMENT_TOKEN_TO_BE_REPLACED

This is going to be one of the biggest Roundups for the site! I made it a goal last week to hit up literally every GameStop in the greater San Jose area in hopes of finding some harder to find gems in the ranks of old DS, Wii, and even some Xbox 360 and PS3 racks. While most of the GameStop’s I won’t be making special trips to again, there were a few stores in some nicer areas that really surprised me! Unfortunately none of these games I would classify as “Super Rare” or anything like that, but there are some fun games here that I’m happy to have in the collection. And I can safely say if you are looking hard enough, you can still find some diamonds in the rough that is retail video game shopping. END_OF_DOCUMENT_TOKEN_TO_BE_REPLACED

Collecting two weeks, this Sunday Roundup has a few targeted pickups I knew I was going to grab, as well as some totally random ones, and even some awesome sale prices! Whenever there are sales that lump together a few solid games and some average one in a bundle price, I’ll always take a look if not grab a few to add to the collection. It’s good, though, these don’t come by too often, otherwise I’d have no money at all! END_OF_DOCUMENT_TOKEN_TO_BE_REPLACED 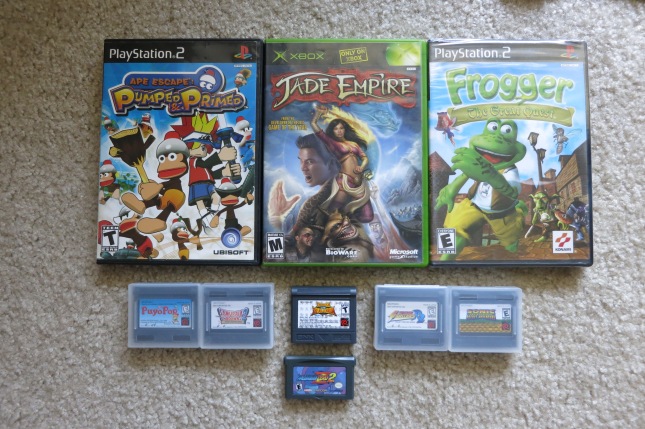 This past weekend I was finally able to make it to the De Anza College Flea Market! It is held every first Saturday of the month, and I’ve been consistently coming up with reasons why I can’t make it! Laura and I would literally be planning on going one weekend, and then something would come up and cause us not to make it. Thankfully this month we had the backing of Laura’s sister and our friend who wanted to go too, cementing our trip! I went into the flea market hoping to find games (naturally) but was really looking for something extraordinary to make the whole trip worthwhile. There were some good finds, some busted haggles, and, if you can believe it, an extraordinary find! END_OF_DOCUMENT_TOKEN_TO_BE_REPLACED

A random trip to Goodwill proved to be quite productive! There were several games at this location this week, and I’m starting to think this is my go-to Goodwill store now. We also happened to stop by GameStop where the 4 for $10 sale was still going on. Even when there are only like, two games that I want, I still find a way to pick up the entire deal. I just wish every GameStop had all the games I want and not just a few, because this is causing me to buy games I don’t really need/want. But that’s really nothing new. END_OF_DOCUMENT_TOKEN_TO_BE_REPLACED

A bit late on getting this one out, but a great week nonetheless for games. After passing on a select few games during the tail end of GameStop’s Buy 2 Get 1 Free deal, I decided to drag myself back to the store to purchase what I honestly should have bought the first time. Sadly, and let this be a lesson, only one of the games from the trio I originally intended on picking up were still available. *sigh*

A preordered game arrived from Amazon this past week, as well as a random sealed PS2 game. Oh, and a very interesting find at Goodwill capped off the week.

END_OF_DOCUMENT_TOKEN_TO_BE_REPLACED

This week saw a collection of games from Goodwill, eBay, and GameStop. A few of those GameStop games were great finds: games I have wanted to play for a long time and games that were simply a steal for the price. Anytime I can find something at Goodwill is always a treat as well, and this there was even a surprise (literally!) in one of the games I bought. Lastly the games from eBay were part of a lot of loose DS games, but still included some swell finds for a sweet price. END_OF_DOCUMENT_TOKEN_TO_BE_REPLACED