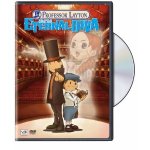 There’s something about Professor Layton and his apprentice number one Luke that has captivated me through three complete DS games. Needless to say I can’t get enough of the British accents, puzzle solving madness, and mysterious antics the duo get themselves into. Enter Professor Layton and the Eternal Diva, an anime film based on the DS series of video games. After arriving in my mailbox via Netflix I was giddy like a child on Christmas morning waiting to get some free time to watch it. And though the movie is based on a puzzle solving video game, Eternal Diva does a fantastic job capturing the look, feel, and charm the DS games have become known for. END_OF_DOCUMENT_TOKEN_TO_BE_REPLACED

Posted by jsicktheslick on 04/10/2012 in Nintendo DS, Randomness

The magical world of Harry Potter meets the magic that is Lego in LEGO Harry Potter Years 5-7. A continuation of Years 1-4, Years 5-7 wraps up the last three books and four movies of Harry, Ron, and Hermione’s adventures to stop He-Who-Must-Not-Be-Named from causing certain doom for wizards and muggles alike. Following the same family friendly formula as past LEGO titles, LEGO Harry Potter Years 5-7 sits nicely as a rare game that combines fun gameplay with a challenge that’s accessible to all ages.

END_OF_DOCUMENT_TOKEN_TO_BE_REPLACED

One of the worst ways to die has to be by a facehugger from the Alien franchise. As if having the creature violate your body to plant its seed inside you isn’t bad enough, after some time a baby alien bursts through your chest. In the new Nintendo DS game Aliens: Infestation there are plenty of gruesome ways to meet your demise, not the least of which is being orally assaulted by a facehugger. Aliens: Infestation is an action game that does the movie franchise justice while tossing in a good portion of Metroid-esque gameplay.