This past weekend I was finally able to make it to the De Anza College Flea Market! It is held every first Saturday of the month, and I’ve been consistently coming up with reasons why I can’t make it! Laura and I would literally be planning on going one weekend, and then something would come up and cause us not to make it. Thankfully this month we had the backing of Laura’s sister and our friend who wanted to go too, cementing our trip! I went into the flea market hoping to find games (naturally) but was really looking for something extraordinary to make the whole trip worthwhile. There were some good finds, some busted haggles, and, if you can believe it, an extraordinary find!

For starters, this flea market was huge. The website claims over 850 vendors, and that was probably about right! Trying to find any game dealers was a head tilting exercise peering in and around countless clothes, junk, jewelry, and everything else imaginable in hopes of finding one of those familiar looking game cases. I would say I found about a dozen or so vendors with games, which was kind of low for what I was hoping to find, but some great deals were had nonetheless! 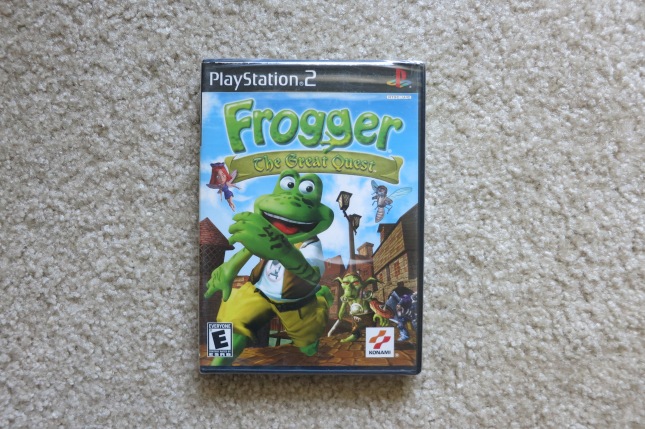 The first purchase was a sole PS2 game: Frogger: The Great Quest. It’s an adventure style game starring a weird anthropomorphic version of one of gaming’s most iconic characters. Believe it or not there’s actually a sequel to this game as well. At just $5 and in brand new packaging, I had to hop on this deal (haha, get it?).

Quick Game Hunter tip: this booth had “All New” games, but it was clear these games were just repackaged used games. You can usually tell this by the type of plastic used to wrap the game: if the game is brand new it’ll have that familiar “Brand New” plastic wrap, which is generally stretched tight around the package, and has a nice crinkly sound to it. Also, you can look for what collector’s call the “Y-Fold” in the packaging. It’s the way the plastic wrap is folded on the top and bottom of the game case. It creates a Y-shape. This seller had a lot of games that were in non-standard packaging, making me believe they have a packaging device at home they could use to re-seal their products. Lame technique that you’ll have to watch out for. 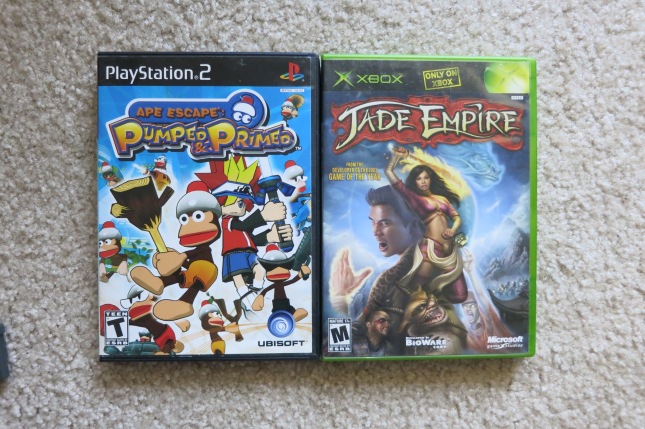 The second vendor I stopped by had a better selection of games than the first, meaning he actually had games I wanted in my collection. Unlike the first booth, this guy had no prices listed on this games, which could go two ways. Thankfully, he picked the right way and gave me a reasonable price for Ape Escape: Pumped & Primed on PS2 and Jade Empire on the original Xbox: $10 for both! There were other games I wanted from this guy, including a few Dreamcast games I didn’t own, but when I opened the cases the game’s weren’t the correct games! This happened with two PSP games as well as a PS1 game as well 😦 Sad day, but I’m glad I checked! Jade Empire was a big win for me, as I wasn’t thinking I’d see that game for anything less than $10 or $15!

The next gentleman I went to had dozens of games ranging from Nintendo 64 to the Dreamcast, and even a box of Saturn games! At first glance I thought the guy might let them go cheap, because when I picked up a copy of Bug! on the Saturn and asked how much his response was, “Do you have a 32X to play that on?”… When I correctly told him I had a Saturn to play it on he gave me an actually decent price: $20. Twenty bucks is what I’d expect to pay online or something. I’m here for a deal. He also had a big boxed version of the Donkey Kong Bongos for the GameCube, so I tried to couple that with Bug! for $30 (because he offered the Bongos for $20 as well), and then the dude started to inadvertently accuse me of trying to low-ball him and scam him of money! I said to hell with him and left. Solidifying the fact that I knew way more than him, he claimed to have sold over $500 worth of games that day alone, but followed up that statement by saying he’d let a complete copy of Virtua Fighter 2 on Saturn go for “No less than $75” Seventy five dollars! I bought that game two years ago for EIGHT DOLLARS! And also, crazy video game guy, no one’s going to pay $175 for you Gamecube and mobile screen without any controller or games. Okay, rant over. 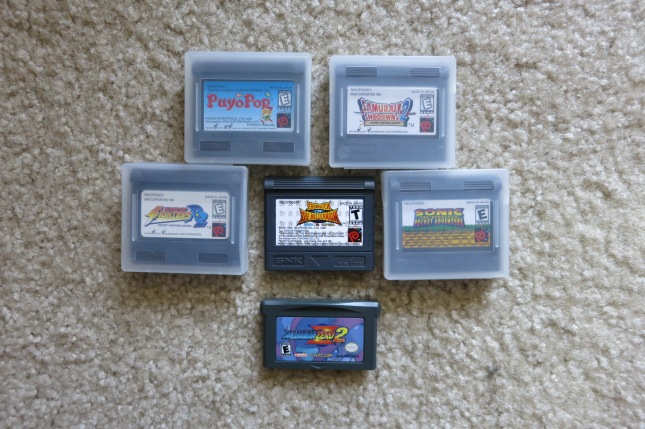 Sadly, there is just one more vendor from which I bought games. But thankfully, this guy was a knockout. Underneath the shaded parking spaces, there was this small booth that only had a trio of tables with merch displayed. Nothing fancy. I noticed by his feet there was an original PlayStation, so I decided to hop over and take a look at his table. Among his available wares were Pokemon toys, some vintage looking Japanese toys, and, underneath a small case, five loose Neo Geo Pocket Color games! The Neo Geo Pocket Color is a system I’ve been hounding over for years, if not a solid decade, to add to my collection. SNK made the system, and on it they put mobile, oftentimes chibi versions of their most famous fighting games, like Fatal Fury, Samurai Shodown, and even unique versions of Capcom vs. SNK! And this dude had 5 solid games: King of Fighters R2, Sonic the Hedgehog: Pocket Adventures, Samurai Shodown 2, Puyo Pop, and last but certainly not least SNK vs. Capcom! I asked how much for them and he said $5 each, but $10 for SNK vs. Capcom. He also had a loose copy of Mega Man Zero 2 for the Game Boy Advance sitting there as well, so I offered him $30 for all 6 games. He counter-offered for $35 and I said deal!

This was the best haul of the day. Part of the reason it was such a great find was the price: most of those games sell in their loose condition for $20 a pop, so getting five all of them for $5 each is absurd. I think the biggest reason I’m so happy with this however is because of what it is: Neo Geo Pocket Color games! I can finally start that collection, and at a great price with some awesome titles! Sure, I wish they were complete with those bitchin’ boxes, but I’ll take cheap and loose over nonexistent any day! I’m going to ask Laura for the actual system as a future birthday/Christmas present if I can’t snag one myself :p

And there you have it. My successful trip to the flea market! Since this happens every month I’ll likely go back sometime. I don’t think I’ll go anytime soon, so I can let the vendors stock up again, but I’ll definitely check it out again. I’ve also told Laura how I want to hit up more garage sales this summer to try and grab more game deals. Just like the flea market, we’ve talked about doing that previously but never got around to it. This year though I’m really going to try and map out locations and hit them up and hopefully grab those games! Stay tuned.

Any flea market finds you’d like to share? I’d love to hear from you and know what you’ve snagged up on your recent ventures!

One response to “Flea Market Finds!”